Introduction to cancer, fertility and the reproductive system

This section has information to help you understand how cancer treatment may affect fertility.

Cancer is the name given to diseases caused by the body’s cells dividing without stopping, forming growths and moving into parts of the body where they are not needed. As a result people with cancer need to have treatments.

Cancer treatments aim to remove the cancer and prevent it from coming back. The main treatments for cancer are chemotherapy, radiotherapy, surgery, hormone therapy and targeted drug therapy. Many people will have two or more of these treatment options as part of their care.

Fertility means being able to get pregnant (conceive) naturally. The parts of a woman’s body that are involved in fertility are called the ‘reproductive system’. 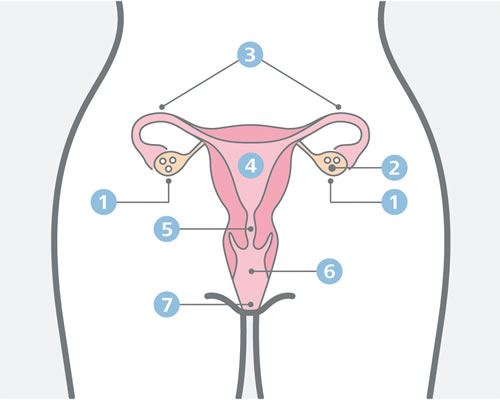 The key parts of the reproductive system are:

1) Ovaries – these two organs sit on either side of the womb inside a woman’s body between her hips (pelvis). The ovaries make the eggs and hormones needed to have a baby. These eggs travel down the fallopian tubes to the womb.

2) Egg (oocyte) – the female reproductive cell, which after fertilisation with sperm is capable of developing into a baby.

3) Fallopian tubes – the two tubes that connect each ovary to the womb (uterus) and this is where the egg is fertilised by the man’s sperm.

4) Womb (uterus) – this sits inside the pelvis and is where the pregnancy develops.

5) Cervix – the opening to the womb which allows menstrual blood to leave the body (periods), and the woman to give birth.

6) Vagina (birth canal) – the opening between the lower part of the cervix and the outside of the body.

7) Vulva – the outside area of the vagina.

Women are born with a large number of eggs in their ovaries. Women cannot grow or make new eggs. The number of eggs a woman has at any point in time is known as her ovarian reserve.

By the time a woman reaches puberty, the number of eggs a woman has is falling all the time. Before puberty this is because many of the eggs waste away and become absorbed by the body.

When a woman reaches puberty, one egg is released each month from the ovary (called ovulation) and travels to the womb. The other eggs that began to mature during this cycle will break down and also be absorbed by the body.

Pregnancy occurs if the egg is fertilised by a sperm, and then implants in the womb. If a fertilised egg does not implant in the womb, the lining of the womb is shed and leaves the body. This results in bleeding known as menstruation or a period.

Age is one of the biggest things affecting the chance of getting pregnant. The number and quality of eggs lowers as women get older.

This fall in the number and quality of eggs lowers fertility and may make it harder to become pregnant. Eventually, there are so few eggs that women become infertile (unable to get pregnant), monthly menstrual periods stop, and the menopause begins. The menopause signals the natural end of a woman’s reproductive years.

Most women reach the menopause by their mid-50s; they stop having periods and are unable to have children naturally. 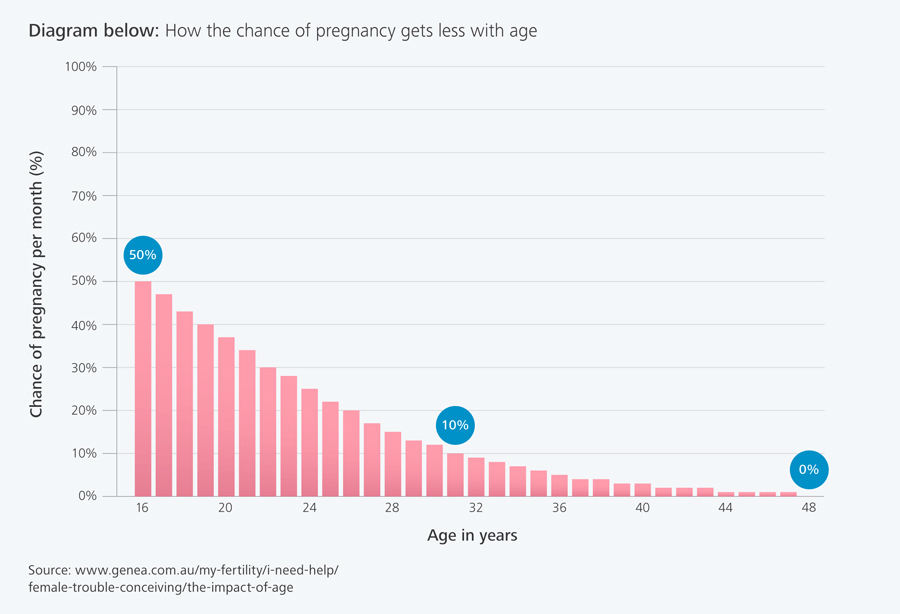 Other than age, fertility in women can also be affected by:

On average, around 16 in 100 (16%) couples without cancer will have fertility problems. If having children in the future is important to you, talk to your cancer care team and fertility care team before starting cancer treatment.

NICE (National Institute for Health and Care Excellence) is an organisation that is separate from the NHS. They create guidelines by looking at the research carried out to treat illness and deliver care for healthcare professionals in England and Wales.

We use cookies on our website to give you the most relevant experience by remembering your preferences and repeat visits. By clicking “Accept”, you consent to the use of ALL the cookies.
Cookie settingsACCEPT
Manage consent

This website uses cookies to improve your experience while you navigate through the website. Out of these, the cookies that are categorized as necessary are stored on your browser as they are essential for the working of basic functionalities of the website. We also use third-party cookies that help us analyze and understand how you use this website. These cookies will be stored in your browser only with your consent. You also have the option to opt-out of these cookies. But opting out of some of these cookies may affect your browsing experience.
Necessary Always Enabled
Necessary cookies are absolutely essential for the website to function properly. These cookies ensure basic functionalities and security features of the website, anonymously.
Functional
Functional cookies help to perform certain functionalities like sharing the content of the website on social media platforms, collect feedbacks, and other third-party features.
Performance
Performance cookies are used to understand and analyze the key performance indexes of the website which helps in delivering a better user experience for the visitors.
Analytics
Analytical cookies are used to understand how visitors interact with the website. These cookies help provide information on metrics the number of visitors, bounce rate, traffic source, etc.
Others
Other uncategorized cookies are those that are being analyzed and have not been classified into a category as yet.
SAVE & ACCEPT
Powered by